We were extremely grateful for a slightly later lay-in on day 3.  An early flight on day 1 from the UK through to a late Northern Lights night followed by the Golden Circle tour and Blue Lagoon trip on day 2…we needed sleep!  Day 3 started with hotel breakfast and wrapping up warm for a snowy walk into the city centre which was around 20 minutes away.

Despite the cold weather in Iceland, we found it to be tolerable thanks to the decision to wear layers!  Yes I wore snow boots and a heavy outer coat but warm leggings and outer wind proof trousers, decent ski-type socks, then thermal top layer followed by a fleece layer was the best way to be dressed…with of course hat, scarf and gloves!  I had seen on Trip Advisor someone mention not to wear jeans in Iceland during these kind of trips because if they get wet, they stay wet and cold.  We walked in snow and were out in the wind and snow showers so appropriate layers is the best advice I could possibly pass on if you’re trying to pack! 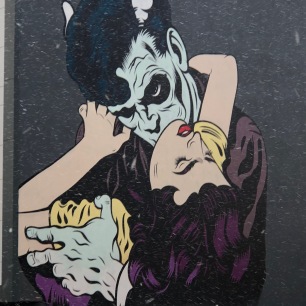 The walk into the centre was interesting from a scenery point of view, the snow covered mountainous backdrop and street art on the side of houses and other buildings made the walk seem much less of a trek as there was something to be spotted all the way along.

One of the main attractions in the centre is the Hallgrímskirkja which is the largest church in Iceland.   Being from England, where churches and cathedrals tell historical stories all over the walls, floors and windows, it was quite bizarre to walk into a very minimal church that if you take the year that it was formalised as a church in 1986…is younger than I am! 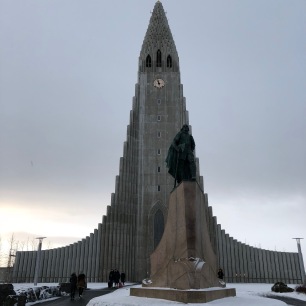 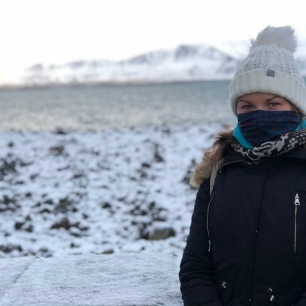 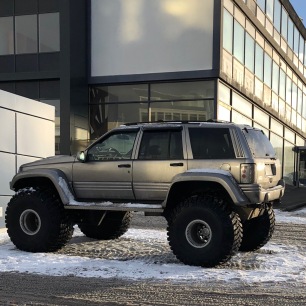 Walking along the waterfront saw a drastic change in the weather and it was bitterly cold!  The majority of the time I had my scarf wrapped around my nose and mouth!  During the time we were in Iceland the big thing that was noticeable about their infrastructure is their ability to continue during the heavy snowy weather.  They have to continue as this is their climate for most of the year yet in England (as has proven yet again this weekend with our snow storm and subsequent road closures and so on), Icelandic people just continue!  Tyres and made to drive on their roads in the snow with no problems.  We saw roads constantly being cleared and traffic moved at a normal steady pace because the roads were clear despite the surrounding snow.

Food and drink in Iceland…(that’s not my beer in the picture…it’s just to pose! haha!) simply put…it is expensive.  Very expensive!  I think in the whole time we were there my husband had about 3 alcoholic drinks.  Generally the beer was around £7 per pint.  I was tempted at one point to have a Baileys Latte, until I saw the cost and realised I could buy a bottle at home for the same price!  That said, the food that we had was generally amazing. 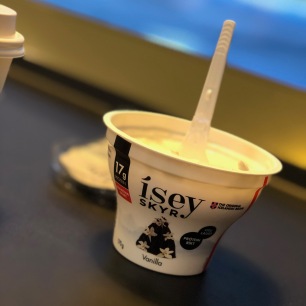 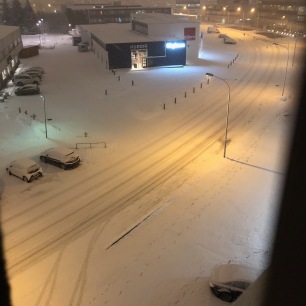 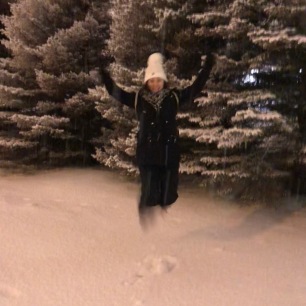 On the final night, the snow falling heavy, we thought the final attempt to see the Northern Lights would be cancelled so we wrapped up warm and headed out for a walk in the snow.  When we got to the reception desk of the hotel, there was a notice to say the Northern Lights trip was going ahead!  Fantastic!  Another chance to try and see the glowing show in the sky!  We still continued out and ended up having a mini snowball fight of course then headed back ready for our final trip.

The guides that night took us to where they believed the best chances of seeing the lights was.  Thingvellir National park!  When we had been there during the Golden Circle Tour on the previous day I had mentioned to Stuart that I bet this would be a fabulous place to see the lights!

There was a lot of solar activity that night but as you can see in the photo below, the cloud cover was also heavy.  The guides gave us over an hour and a half at the viewing point but this is the thing with a natural phenomena … it’s nature, it’s uncontrollable, and despite efforts to predict, you can never guarantee that you will get those required conditions to make it possible to see it happening.  It was still an amazing experience! 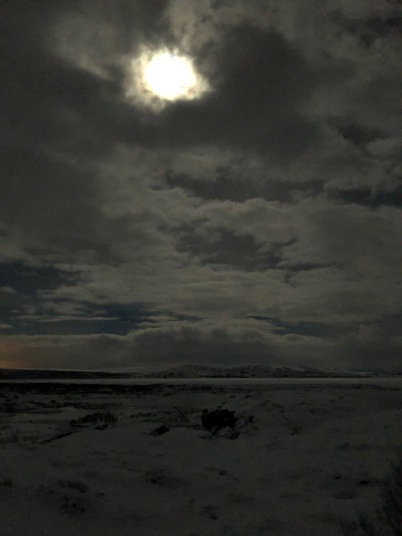 The following morning we headed back to the Airport early and home, back to reality with parent’s evening for my eldest within a few hours of landing!  Haha!

Iceland is most certainly a bucket-list place, somewhere really worth going to even once. As I said in my first post, my reason for choosing Iceland was for the other things you can do and see to give a memorable trip even if the lights don’t appear.  We feel very lucky to have seen what we did on the first night even if it wasn’t classed as a full viewing, it’s more than many people get on numerous trips out so we feel it was a fulfilled holiday!

Have you been to Iceland?  Is it on your bucket-list of places to visit?  I’d love to know!

Thanks for reading! Let me know what you think in the comments box below or on my facebook page. Check out my social media….links below🙂

E m p t i e s 💕 I have so many empties that have accumulated since my last post that I’ve decided to split them down into a few posts! Check out the link in bio to have a read of my thoughts. Spot any favourites? 💕
R e d 🥰 I’m still amazed at the difference the @marianilastockholm Red Colour Refresh made to my hair yesterday...the first photo was only 4 days ago and the second photo was yesterday after using the treatment! I already use their Shampoo & Conditioner and this is a definite win! Also means I can keep my colour for longer whilst self isolating without having to reach for box colour (which I just wouldn’t do anyway!!) it was recommended by my Hairdresser @kim.powell.hairdressing and will feature on my blog soon! 💖
S u p p o r t 💕 I received this for Christmas probably 2018 from my Sister and it’s been sat into draw. I opened it about a week ago and oh my gosh I couldn’t believe I’d left it for so long! The smell of this is really soothing and is almost spa like when you step into a menthol steam room! Certainly a good pick me up at the moment! 💕 @aromatherapyassociates
H y d r a t i n g 🥰 I’m loving using this new moisturiser from Bobbi Brown. Today I mixed this with a bit of my Estée Lauder Double Wear foundation to give my skin a much lighter base. They mixed perfectly and felt lovely on my skin. Perfect for a daytime makeup on a day I’m staying home but want a ‘pick me up’ kind of look. Do you ever use skincare to help your makeup products work differently? See my stories for today’s look in timelapse 🥰 #stayhomestaysafe 🥰
O l a p l e x 💖 When I last had my hair coloured I was chatting to @kim.powell.hairdressing about my hair snapping when I dry it or brush it. Her suggestion was to try this Bonding oil by @olaplex ... I swear this stuff is like a little bottle of magic! My hair doesn’t snap anywhere near as much ... it feels silky soft AND smells lovely!! It’s also cut down my drying time too! Have you tried it? 💖
T i k T o k ? 😜 So this is the same post as my Makeup account but it’s pink Wednesday so why not?? Have you seen I’m on tiktok? If not my user name is the same as my makeup account on here, @rachelmaslinmakeupartist ... this was the resulting look from a funny lip sync makeup tutorial style tiktok ... just for fun!! What do you think? 😄
M o i s t u r i s e r 💖 It has to be said, I never thought any moisturiser would stop me using Clinique Moisture Surge ... which I love by the way!! However, I have to say, I’m LOVING using the new @bobbibrownuk Hydrating Fresh Water Cream! When I first opened it I thought it was quite a thick cream but it softens and absorbs so well and my skin feels lovely and hydrated. I also bought a new pot of Skin Base which I also love but this is for my pro kit as it’s perfect under foundation as a moisturizing primer and it smells AMAZING! I’ll also be getting a Fresh Water Cream for my kit ... but of course I had to try it for me first 😂 Have you tried either of these? 😀
T h r o w b a c k 😋 Throwback Thursday to better days! When I first went red last year! Still love it! ❤️ Hair by @kim.powell.hairdressing 💜 • • • #redhair #redhairdontcare #selfie #nofilter #throwbackthursday #throwback #thursdaythrowback #curlyhair #gotmyhurrdid #2019 #simplemakeup #naturalmakeup #mua #makeupartist #makeupcommunity #beautycommunity #discoverunder5k #30plus #30plusstyle #30plusblogs #beautyblog #ukblogger #hampshirebloggers #beautybloggers #beautyandtheballroom